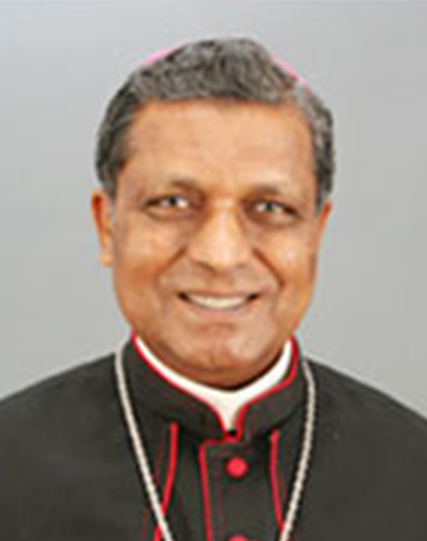 Most. Rev. Dr. Soosapakiam M, the present Archbishop of the Latin Archdiocese of Trivandrum, was born on 11th March, 1946 at Marthanadanthuarai one of the startling coastal region of the Arabian Sea. The people of this parish possess a deep interest and craze for football played in the sea shore. His Grace was grown up as among the people but he was notorious in his devotion and faithfulness to God. After his schooling at St. Aloysious higher secondary school, he joined in St. Vincent’s seminary. He was very noteworthy in his diligence, prudence and sportsmanship in the seminary. He completed his philosophy and theology at St. Joseph’s Pontifical Seminary, Alway. Carmelgiri seminary has a rich football tradition. Even today this seminary conducts football tournaments alternatively. He was ordained a priest on 20th Dec 1969.

As a priest he was held responsible for various offices and parishes. On 1992, he was sent to Rome for his higher studies. Instantly he was appointed as spiritual father and professor at Mangalapuzha seminary, Alway. Then he served as the prefect and Rector at St. Vincent’s minor seminary. He spent a couple of years formatting the vibrant candidates for priesthood and eventually convincing them about the significance of sports. Finally His Grace received his episcopal ordination on 2nd Feb 1990. At present he serves as the president of KCBC and KRLCBC.

Amidst of all these hectic offices and pastoral administration, he was very gracious and generous towards the Little Flower Football Academy. Indeed LiFFA was begun by the kind permission of His Grace on 2015. In fact His Grace’s guidance, appreciation and critical appraisal are the great assets of the academy. He gives his wholehearted support for all the activities of the diocesan football academy.