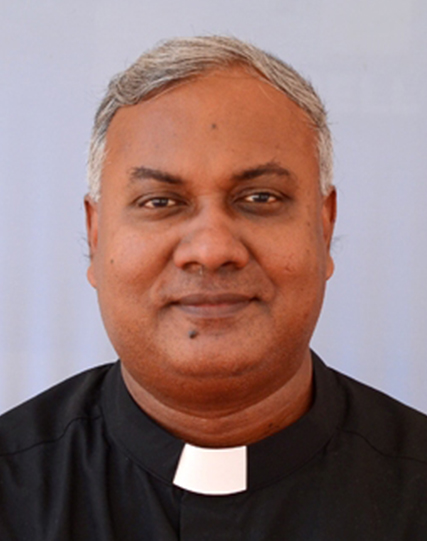 Rev. Msgr. Thomas J Netto was the first director of LiFFA Trivandrum. He was born at Puthiyathura where the glazing feathers of St. George is at work by lending the divine invincible hands to all the endeavours of the devotees. He used to play football at the coastal belt and imbibed the spirit of sportsmanship at his very young age itself. Immediately after his schooling, he joined St. Vincent’s minor seminary. Throughout his seminary life he was a candidate who had the zeal of the divine fragrance of God. And thereby he could impart it to his colleagues. He had a blatant quest for sports activities like football.  He did his philosophy and theology at St. Joseph’s Pontifical Seminary, Alway where football is the dignified and well appreciated sports activity with much vigour. He was ordained a priest on 19th Dec 1989.

As a priest, he did the service of the people of God in and through various parishes and institutions. Followingly he was sent to Rome  for his higher studies. After securing a degree, he had been held responsible in various parishes and institutions. Instantly he was posted as the Rector of St. Vincent’s seminary. He demonstrated himself to the students as an exemplary figure in building healthy relationships, excellence, manners, sportsmanship etc….. He was the regular presence in the playground and prompted the brothers to play healthy sports and keep the body sound. At present he serves as the forane vicar of Kazhakuttam and the parish priest of Murukkumpuzha.

He is denoted as a priest who lends a satiable service to the people. He is the catalyst who succoured in initiating and actuating the dream project LiFFA Trivandrum. As said well begun is half done but of course the igniter has to confront an immense of queries from all around. LiFFA is diocesan  residential football academy begun for the overall development of the coastal community by fostering the talented footballers to the mainstream of the professional leagues. Indeed, LiFFA is in it’s proper direction. As the director, he had given extraordinary buttress to all the activities of the academy. He dazzled by offering the basic amenities and assuring the outstanding dignity in the intellective, sportive and disciplinary fields.