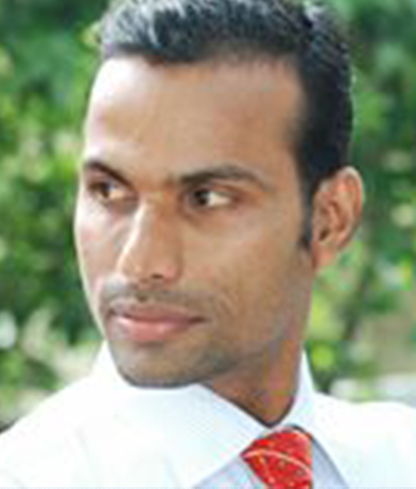 Mr.Reegan Alex was the first Secretary of LiFFA Trivandrum. He was born at Poovar, a scenic place surrounded by the Arabian Sea, the AVM Canal and the Neyyar River. He used to watch football being played throughout the coastal belt and imbibed the spirit of sportsmanship at a very young age itself. After his primary education from Poovar, he joined Govt. Fisheries School, Valiyathura. He did his Pre Degree from St. Xavier’s College and B.Com degree at Govt. Arts College, Trivandrum. And also completed his LLB degree at Ernakulam Law College. He had a blatant quest for sports activities like football.

Mr. Reagan formed the Kerala MatsyaVidhyarthiSamithy(KMVS) in 2005 to protect the rights of fisheries students in Kerala. He was a young fighter who organized many protests and conferences for higher education and the rights of students in the fisheries sector who are suffering all over Kerala and have won many historic declarations from the government. He was instrumental in giving a new dimension to Poovar’s sporting history. Reagan Alex is a great personality who founded the SBFA Football Academy in 2011 to bring back the sporting culture that existed in Poovar more than a quarter of a century ago, and thereby guiding many young people to reach their life goals. He holds the official position of Special Village Officer in the Kannur Collector’s Office. He has been LIFFA’s first Secretary during its inception in 2015. Reagan Alex played a key role in all of LiFFA’s development activities during this period. Reagan Alex had always empowered the members of LiFFA to successfully complete all the initiatives. He imparts full-fledged support to promote LiFFA to an outstanding level in the realm of both basic amenities and excellence on and off the field. After his tenure at LiFFA, Poovar under Reagan marked a new chapter in football by showing its organizational prowess to South Indian level football tournament by shaping the SBFA Cup in 2018. The two-day, day and night football tournament featuring the top 24 teams from South India created a festive atmosphere in the Kanyakumari and Thiruvananthapuram Coastal area. Reagan continues to contribute to Poovar sports development through SBFA.