The U-12 LADDER CUP is a junior football tournament for players of age 12 or younger for Trivandrum and Kanyakumari coastal area academies organized by LiFFA and Latin Archdiocese of Trivandrum since 2013.

It was a historic competition for the Santhosh trophy villagers’ SMRC budding youngsters, who became the first club to be crowned with the Ladder Cup title on two separate occasions, adding to their 2013 runner up. St. Thomas Sports and Arts Club, Valiaveli claimed third place after coming from behind in the loosers finals against St. Peters FA Anjengo. SMRC’s Hejin was named player of the tournament and awarded the Golden Ball, along with the France Clothing Store’s T-Shirt Award, for two outstanding performances in which he scored a total of four goals. Completing a duo of accolades for SMRC, St. Jude’s Chinnathura’s Christiano Judeson was awarded the best forward and most valuable player of the tournament award.

LiFFA proved yet again to be an excellent host for the competition and the fans were able to enjoy performances by teams blessed with technical and tactical skills playing fast and attacking football. The standard of the organizing the tournament met all the requirements and ensured that the competition ran smoothly.

LiFFA Trivandrum Residential Football Academy hosts the Ladder Cup Tournament every year to find talented football players from the coastal regions of Trivandrum and Kanyakumari. In the 10 days programme, the above said coastal regions has been divided into two zones and the Ladder Cup were organized into two venues such as Marian Engineering College stadium and SMRC stadium South Kollemcode. Almost 400 players from 25 teams of coastal villages have been participated in the tournament. Among the 400 players, 120 talented players have been selected for further training camps in the coming months, best 15 students among this 120 will be admitted to LiFFA Residential Academy after the three phases of camps in the 2021-2022 academic year.

Within the limited facilities since 2015, LiFFA has already contributed 2 Indian international players, 13 national players and 36 state players. LiFFA is also gearing up to play in the I-League in the future by setting up its own world-class stadium and residential facilities. LiFFA Director, Very Rev. Msgr. Wilfred E., President Shri. Davidson L. and Secretary Mr. Jude Antony were informed in the valedictory function. 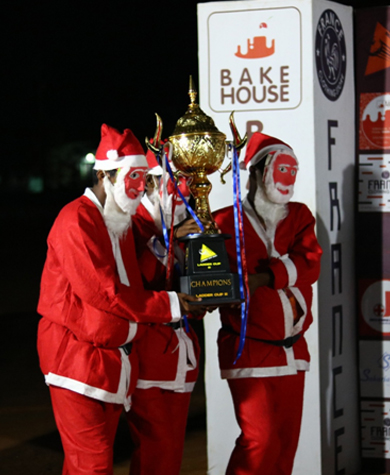 The 3rd season of the tournament in 2020 was held in two venues, Marian Engineering College Stadium, Menamkulam and SMRC Stadium South Kollemcode. Due to the COVID -19 pandemic situation we were forced to conduct the tournament in two venues. 8 teams from Kanyakumari coastal region and 17 teams from Trivandrum coastal region were participated. The tournament took place in 10 days. Semi-finals match was played between FC E.P Thurai and St. Thomas FC Valiaveli, and another semi-final match was St. Peter’s FA Anjengo and SMRC South Kollemcode, who become the champions of second consecutive seasons, beating FC E.P Thurai in the final game with a score of 1-0 winning the trophy.

The second season of the tournament had more participants, in total 16 teams took part and the winner was SMRC South Kollemcode.